The future of Europe

On the eve of Europe Day (9 May), new research from the Grant Thornton International Business Report (IBR) reveals that businesses in France and Germany, the eurozone’s two biggest economies, are a world apart in their views on the bloc’s future. This highlights a concern that a lack of clarity of vision on the eurozone’s direction could lead to crippling business uncertainty and ultimately damage growth prospects. 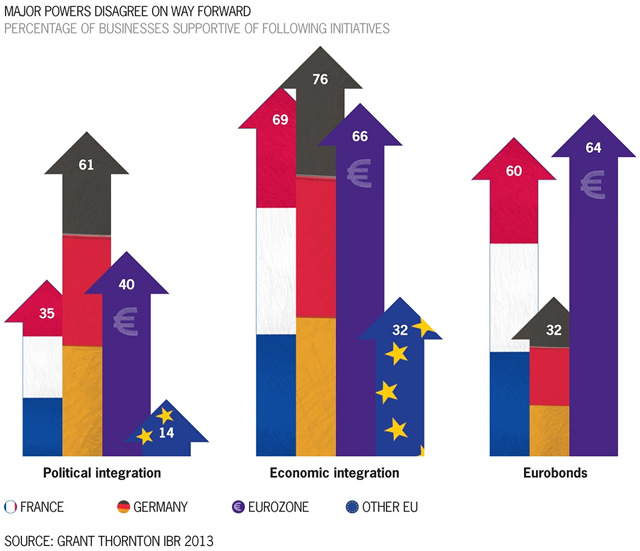 The research also asked businesses how they viewed their country’s membership in the euro thus far. 85% in Germany view membership as positive, up from 79% last year. By contrast, the proportion in France describing their membership as positive fell from 71% to just 64% - the joint lowest level in the eurozone. Moreover, one in five French business leaders (20%) describe joining the euro as negative – the highest proportion in the eurozone and well above the German result (7%).

"The concern for businesses is around clarity of vision. The region has been through perhaps its most challenging spell since the EU was created and the Italian elections and the bailout of Cyprus tell us the crisis is far from over. Strong, united leadership is needed to end the ongoing uncertainty and encourage business leaders to make the investments that will lead to jobs and growth."

With Germany on course to post a budget surplus in 2013 and France set to miss its 3% deficit target, business leaders in the two economies have understandably different views on debt mutualisation. Just 32% of businesses in Germany would support the introduction of so-called eurobonds, approximately half the proportion in France (60%).

Paul Raleigh added: “The question around eurobonds acts as a proxy for the confidence of business leaders in the ability of their economy to service debt. The overall public debt levels of the two economies are not too dissimilar but the German business community is clearly more confident than the French business community.” 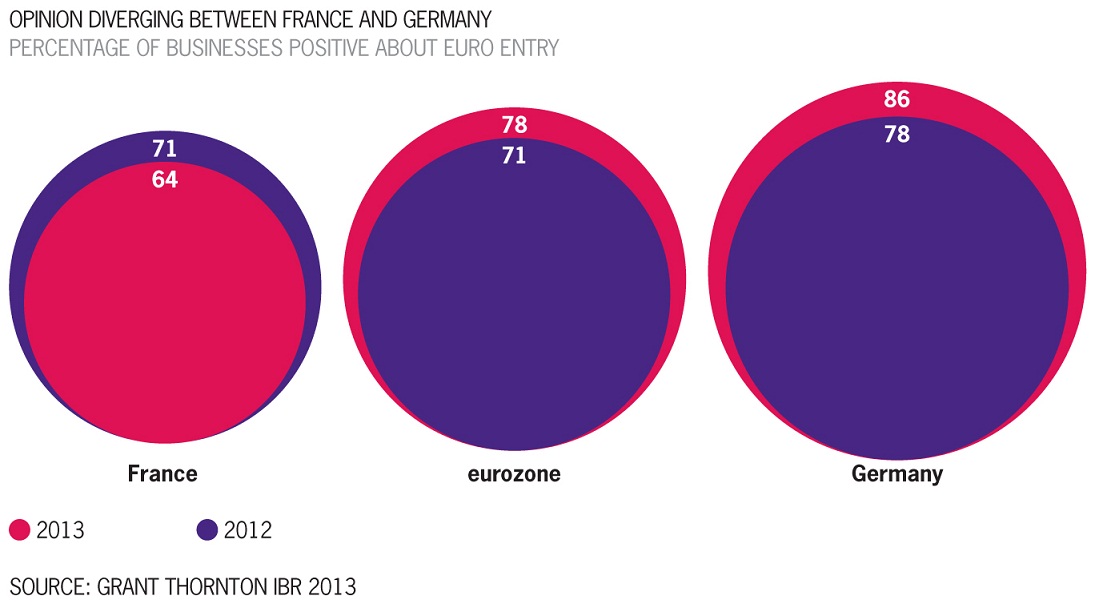 The Grant Thornton International Business Report (IBR) provides insight into the views and expectations of more than 12,500 businesses per year across 44 economies. This unique survey draws upon 21 years of trend data for most European participants and 10 years for many non-European economies. For more information, please visit: www.internationalbusinessreport.com

Data collection is managed by Experian. Questionnaires are translated into local languages with each participating country having the option to ask a small number of country specific questions in addition to the core questionnaire. Fieldwork is undertaken on a quarterly basis. The research is carried out primarily by telephone.

IBR is a survey of both listed and privately held businesses. The data for this release are drawn from interviews with 3,100 chief executive officers, managing directors, chairmen or other senior executives from all industry sectors conducted between November 2012 and February 2013. A full list of participating economies (and total interviews) is shown below: